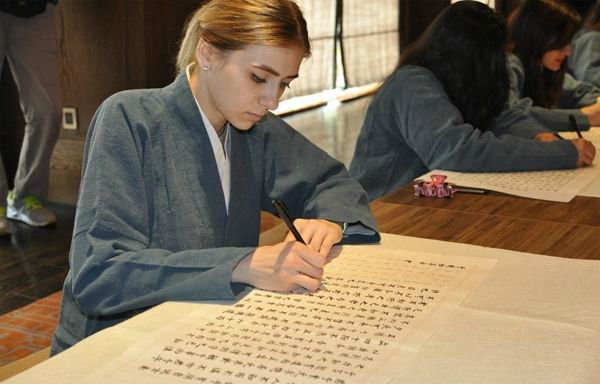 Learning Chinese is not as hard as you might think. It just looks scary to Westerners because of the unfamiliar writing. Mandarin Chinese is refreshingly logical and straightforward to learn. Here's an example from the British Council in which they introduce us to Chinese characters:

'Let's take 人 (ren) as an example. A single 人 means a person, a human being. Two 人 make a new character, 从 (cong), which means to follow (one person followed by another person). Three 人 make 众, which means the masses or a crowd. Likewise, a single 木 means a tree or wood. Two 木 make 林, meaning woods. Three 木 make 森, which means a forest.'

Much of Chinese writing is built up in a similarly logical fashion, with a few quirks thrown in to keep us on our toes – as a natural human language, it's got to have a few of those to avoid being boring.

When it comes to speaking, the sounds of the Chinese are pretty straightforward as well. It is much harder for a Chinese person to learn English than for an English-speaker to learn Chinese!

The only tricky part of Chinese speech is the tonal system. It changes the meaning of an utterance according to how it is 'sung.' There are four tones: flat, slowly rising, dipping then rising, and sharply falling. The sounds give Chinese their musicality, and getting the tone right is an essential part of being understood correctly. With a few months of practice, a Westerner can master how to 'sing' Chinese and make themselves understood in the language.

The best way to learn any language is via one-to-one, face-to-face lessons with native speakers. It is possible via new media in a way it has not been in the past. Learners can save the price of an air ticket to China and spend it on live internet video lessons instead. One new school that provides just that – in this case via Skype – is Wave Chinese.

There's plenty of face time on offer here. Plus bespoke study plans, personally curated materials for advanced levels, a 30-day money-back guarantee, and lots of "singing syllables." All levels are catered for by qualified native Chinese speakers based in China and other locations around the world. Onboarding includes a free lesson to try out the system before committing to purchase.